Not a bath, which would be much more appropriate, coated as I am in sweat, sun cream, oil, general road dirt and dead flies. I’m waiting for a train to return me to Taunton so I can cycle up a fuck-off hill (again), to spend a night in my tent before going home tomorrow without a wash or change of clothes (my own fault, I was being minimalist in terms of luggage. This is why we have a sleeping bag liner). 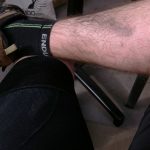 I’ve been pretty impressed by my body today. I had a ‘general discomfort’ moment but after a stop and some food it was fine. My legs could have finished the ride, they just kept going. But I haven’t slept for 36 hours, and while I haven’t been nodding off on the bike instead I’ve been mentally spaced out (had this on BGB), it gets scary and doesn’t feel safe. Perhaps coming to do this ride was a mistake, given the way I’ve been feeling recently and that I’m only a week into this lot of medication. But I thought I was being lazy thinking of not starting, that it would be good to do some hard-core exercise and be outside.  And no matter how much I might hate it at the time, if I complete a ride the sense of achievement is inextinguishable.

Anyway I’m not supposed to be in Bath. I should be ‘next door’ in Bradford-upon-Avon getting a receipt and then setting off on the final stage of this ride, which is 100 km (longest stage on LEL was 97 km iirc and that was the first one when you have all the enthusiasm). I missed the Bradford turning but that only served to make my decision to DNF easier. I’ve done 300 km to here (still in time) but somehow it’s not much of an achievement when you’ve set out to do 400.

The morning after I have a couple of hours to kill in Taunton before my train home.

Hearing Sarah describe how she kept going to finish an hour over time put me to shame this morning. I thought yesterday that it had been a mistake to start, but now maybe just a mistake not to finish. Which is better I suppose. Ah well, hopefully I’ve burnt a few of the extra calories I’ve been eating recently, and maintained fitness for the 600 km I’m aiming for to get an SR this year. I should get myself an emergency bivvy bag so I can be more confident about just keeping going, knowing that I can stop as often as I need. This ride could be done as a perm starting wherever appropriate in the morning to align the timings with this one…stop it!

Last night on the ride up to Clayhidon I caught up with Hugo who was walking (I’d had 2 hours rest in Bath, food, and a nap on the train. I’m not sure I’d have made it without walking otherwise). He said he was broken and never doing it again. Now I think about it, I wasn’t thinking that when I was struggling; more sadness that once again I couldn’t keep myself awake enough to do it.  But yeah, I will do ‘it’ again.

A couple of chaps came over to speak to Marcus, Sarah and me while we were packing up this morning, Rob and Sh?, who lived near Chippenham. They’d ostensibly come over to look at my tent and then Rob was asking about my bike. I’m never sure when folk are interested in it if that’s a good thing or not. My Cheviot seems to be a little alien for audax, which makes me want to keep it and do them all on it. Someone in the coffee shop I am currently twiddling my thumbs in has just been explaining to his companion that the bike he wants is described as a “cafe racer”, and now I’ve looked it up the term seems to refer to motorbikes, but I did think that an audax bike may be best described as a “24hr garage racer”. 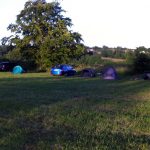 So after the 22:30 start, when it hadn’t finished getting dark, we had a quick control in Tiverton. Then it was a simple matter of riding up the Exe valley with the sky still not quite black (it never really was), some stars out including a big yellow/orange one near the horizon – a planet? The over-half moon was bright to the west and glistened off the river in places, which was pretty special.

We had a control in someone’s house at 1:45 am – it was the home of the organiser’s mother, with his wife and daughter helping out. I didn’t know that until later, at the time it was just surreal to be parking bikes on someone’s front lawn and sitting in their living room eating flapjacks in the middle of the night. Riding up out of Minehead, after a while I realised that the light in the sky was getting brighter and so must be the first signs of dawn rather than the last glow of the previous day. To my left I thought I could see mist in a valley bellow, but then realised that it could be the sea and the lights beyond it the coast of Wales (it was).

As dawn proper came, I was on flat deserted roads and surrounded by mist. Sun was up by the time I passed Glastonbury but it was still misty and I couldn’t see the Tor until some time later when I was higher up at the edge of the Mendips. There was an amazing moment around Glastonbury riding through the mist which was bright and hazy, and approaching a darker patch suddenly the sun disappeared and I realised it was the shadow of a hill that I couldn’t see at all before. 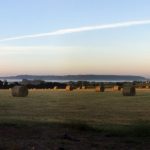 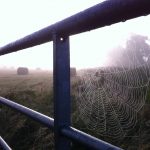 I missed the Esso garage in Nunny Catch (wins place name of the ride) but felt audax-enough to stop at a shop in Frome for a receipt and knew that it would suffice. I’d been physically uncomfortable leading up to this stop (neck especially) and spent a while eating and having a rest off the bike. Fine after that although I could feel a bit of saddle rub and made sure to put some more conotrane on when facilities permitted.

The Bath-Bristol tunnels were fab – several of us seemed to really enjoy these although I find it hard to explain why, but I’m pleased that I wasn’t alone in my geekiness.

The Severn bridge was both a highlight and marked a turning point, although the cycle path was badly signed and we went around in a bit of a circle; funny to visit Wales for about 15 minutes then leave again. Just over the bridge Sarah and I got mixed into a group ride and one of the leaders said ‘let the audax riders through’ which pretty much made my day (also they pointed us in the direction of Tesco which probably saved a lot more faffing). I didn’t stay long as I’d had a quick petrol station stop about 20 km before and was feeling good, and decided to have a proper stop at Wooton-under-Edge.  Although once I set off that didn’t last long and started to feel tired and spaced out again. Had a good hour in Wooton and ate too much. 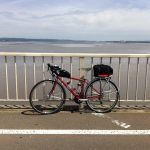 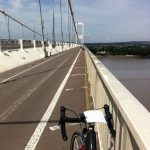 Feeling woken and rested by the Wooton stop didn’t last long, it was only 38 km to Bradford but I had to stop in Chipping Soddbury for half an hour before I did something stupid. I still wasn’t nodding off but just felt really out of it, very distant from myself, although still going on autopilot and managing to pedal and change gear as normal. I think the heat was getting to me now as well, it was baking, the sky had been clear since the start of the ride. Enough brain remained to know I wasn’t safe on the road, especially as some of these were A and B roads. Even when I felt more awake later I was taking chances at junctions that I wouldn’t normally.  I had half an hour lying on the grass in a park but didn’t really sleep much. Felt ok enough to continue for a while. Missed a turning for Bradford-upon-Avon where I’d pretty much decided to call it a day, I could have just followed a road sign further on to get there but the road I was on was familiar (the Exe – Buzzard went in the opposite direction) and I knew I could just stay on it to Bath. And then I could find the train station.  I had to wait 2 hours for a train with a bike reservation, although top marks to the station staff (GWR?) for being able to book a space at very short notice.  Then that ride out of Taunton again, up the never-ending hill, to the Half Moon pub.

As I am sitting writing this a bunch of Santas on motorbikes (and a few pillion elves) just rode through the middle of Taunton. In a heatwave in June. I’m pleased I can still tell the difference between sleep-deprived hallucinations and general human weirdness. 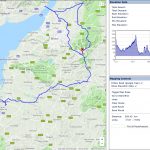