Last year I rode Mellow Fruitfulness (50 km) as a sort of ‘return to audax’ after time off the bike recovering from surgery. This time I went for the 100 km option, knowing I’d be behind from the start as the first train from Leeds gets to Mytholmroyd just after 9 am (the start time). Happily I wasn’t the only one, there were two others on the train and several more at the start, including Bob Bialek who was changing an inner tube at 9.10 am.  It was a mild day and the only thing that could be claimed as mist was a little low cloud on first entering Lancashire. Later it was sunny and the arm warmers came off. The ride starts as it means to go on, up to Heptonstall and over the cobbles. I stayed on the bike this time, although it was bloody hard work. Then it’s the Long Causeway, which has entered my ‘favourite roads’ list. Great views looking back into Calderdale.

I was riding ‘blind’ in a sense (although less so than last weekend when the routesheet was distance-less), and relying on mental arithmetic based on 20 kph to work out approximate arrival times at route instructions, after my computer died. Average speeds are not particularly helpful for short stages over hilly roads. Well that’s my excuse for missing the first info control anyway; by the time I realised, I’d climbed and descended again, and I wasn’t going back. I did take a photo shortly after the info in Cxx which I hoped would provide a proof of passage if it cames down to it, although I’m enjoying the ride so much that I don’t care about the AAA points on offer (edit: actually I did a bit). 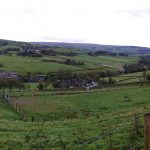 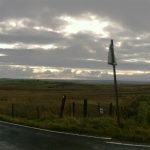 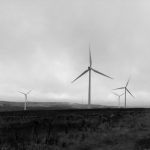 Travelling through the back streets of Burnley involved a bit of traffic dodging where priorities seemed to go out of the window, then it was up and along a ridge south of Pendle Hill.  The sun was out now, it was a cracking day. 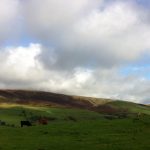 After a ‘R @ T’ I was faced with the view of a crazily steep road…surely we’re not riding up that?  Of course we are, is always the answer. 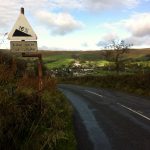 Down past the slightly battered gradient sign into Sabden and then up, up and a little more up over the Nick of Pendle.  This is a beautiful road, and the descent equally good, with a road wide and with enough visibility you can just let go.  Passed a ski centre as if the hilliness isn’t obvious enough, and then through Clitheroe.

Immersed in my mental arithmetic I couldn’t quite understand how the Mellow Fruitfulness ride fits into this one, but I had assumed they used the same first cafe control which isn’t the case. We stopped at the Country Kitchen Cafe in Waddington; when I arrived there were loads of bikes and it was pretty busy, although by the time I left there were only a few steads remaining. The cafe are obviously regulars at this sort of thing – in fact it sounded like the owner is a cyclist going on an eavesdropped conversation – an did an excellent job. Beans on toasts for me, I didn’t bother looking at the menu.  Climbing again after the control, and I was soon passed by a trio who were getting ready to leave just after me. I felt especially slow, I don’t think I passed anyone unless they had stopped for some reason.  Great views looking back towards Pendle Hill. 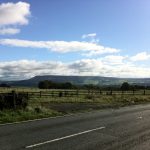 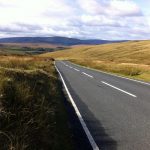 Somewhere along here was another info control which asked how many chimneys were on a farmhouse. Now there were two brick chimneys, incorporating three chimney pots, plus another from a boiler or similar, so I just took a photo.  Poor Chris Crossland at the arrivee had clearly had queries from many riders and was accepting all possible answers. 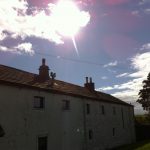 I noticed the development of a new noise which sounded like something coming loose, so I stopped in Slaidburn to check the bolts on rack and mudguards, these being things that have wobbled in the past. No sign of any problems. Slaidburn passed quickly, I felt like I’d already stopped too many times to take photos to do so again here. Then the route turns to head for home, south east and over the other side of Pendle Hill.  All afternoon the weather remained very clear, Ingleborough and Pen-y-ghent were visible in the distance. 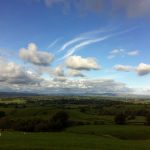 Soon the source of the noise became clear, as a loud rattle caused me to look at the rear while riding, and I could see my mud guard had broken. I resolved to stop at the approaching T junction where I joined a group from Calderdale CTC who I’d been playing leap frog with recently. I am having no luck with mud guards, these were new just before LEL…I was expecting it to have gone at a self-drilled hole again but this fracture was straight across the top where there is nothing else happening. I was going to gaffer-tape it together but one of the others suggested cable-tying the stays to my rack which was a far batter idea (although it did then continue to rattle for the rest of the ride). My choice of red cable ties was questioned but I pointed out they matched my frame. As I whinged about this being my third failure, and the inability to purchase single guards (so if anyone wants a front one met me know) the chap wondered if the weight of my rear light (a bit like this although an older model) was causing the problem. I’d gone for a rear guard mounted light as when I bought the bike I intended it having a touring and an audax mode, the difference being the removal of racks and a change of tyres. In the event I’ve found it incompatible with decent sized saddle bags (they break mud guards…) and so the rear rack has become a permanent feature and one that could happily host a light. Actually it’s been doubly important in allowing me to add panniers for pre-audax camping.

Mudguard suitably botched the next stop was the control at Coldwell Activity Centre.  There had been an increasing number of people coming the other way on muddy off-road motorbikes bearing numbers, and this seemed to be an HQ for them too, after bombing around some fields here.  After two bits of cake AND a bag of crisps I felt ready to tackle Widdop.  I knew what was coming from Mellow Fruitfulness, but I was happy to make it up without stopping, making the most of my triple.  The rusty car from last time was still lying down the steep hillside. 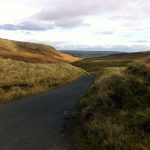 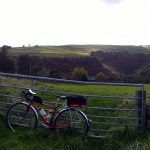 The descent from the top is great but there are a few little ups to keep the legs working, and a crazy zigzag at the start of Hebden Water, before arriving at the Slack junction and rejoining the outward route.  I momentarily considered taking the signed and more major road to Hebden, avoiding those cobbles, but at the last minute went with the devil I knew better and back down through bone-shaking Heptonstall.

I rolled into the community centre while there were still plenty of people and bikes about, including this epic: 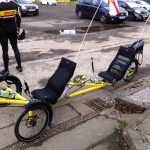 I don’t use Strava that much, as my phone can only just cope with 200 kms, but I did have it on today and happily that was enough to make up for my missing info control.

I spoke to Nigel and Bob, including more LEL debriefing.  Slightly less comforting was the Calderdale CTC chap, part of the group I’d seen several times, who came up to shake my hand and asked if I was new to this sort of thing.  Now I’m a long way off being an experienced audaxer, I know he was being friendly, but this sent me into an ‘I really am slow’ meh…it would be ok if I could cope with the sleep deprivation but LEL and BGB demonstrate that I can’t, so I do need to work on that time in hand. 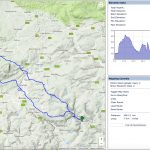