First audax for a long time, so a 55 km seemed like a good place to start.  Although this also had 1.25 AAA points… Starting from Mytholmroyd at 10 am meant I could get the train and not be in a rush.  There was another guy on the train doing the 100 km Season of Mists, and since the train got in at about 9 am when that ride was due to start I think I’d do that in future, a few minutes late starting would be fairly insignificant. 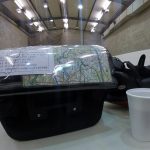 The short ride to Hebden Bridge provides a brief warm-up before the hellish climb to Heptonstall.  I had managed to make it up there and over the first few metres of cobbles when a rider behind came off, so I stopped and gingerly started making my way back to check she was ok.  By the time I got there several others had arrived and she was fine, but I knew there was no way I could ride now, staring on cobbles with legs like jelly, and feeling a bit vomity.  So along with many others it was a walk over the cobbles until they finally became almost level.  At Slack we headed west towards Blackshaw Head and then followed The Long Causeway, a great route which runs along the south west side of Heptonstall and Worsthorne Moors. 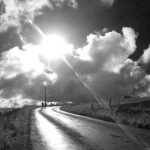 Then a drop down to a control at JJ’s Diner on the Burnley Road.  The place was described as “a little Lancastrian”, but at times like this a bit of gruff efficiency can be just the job. 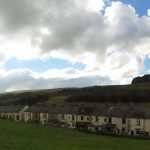 The middle section was, with some undulation, all ascent, and when looking at the route I’d thought it would be the worst part.  However shortly before arriving at the second control at Coldwell a view of Widdop appeared, and with it the realisation that yes, the route did go that way.  I’m glad that I didn’t speak to the rider who said “Widdop puts the fear of God into folk” until afterwards.  The control was pleasant with excellent cake, most of us sat outside in the sun being amused by the puppies that one of the organisers had with them. 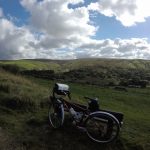 After a short steep downhill section the ascent up towards Widdop reservoir began.  I’d already had a gear mis-change at the bottom and had to get off and spin the pedals by hand to make starting the hill, featuring cattle grid, possible.  I got as far as I could but when a car came down in the opposite direction I felt too wobbly and gave up, getting off to walk.  Happily I wasn’t alone, and chatted to a young woman whose riding companion was clearly simultaneously wanting to wait for her but also trying to keep pedalling. She said she normally did shorter rides but that her Dad up ahead (not partner, glad I hadn’t said anything embarrassing!) was a regular audaxer.  There was a rusted car in the valley which had presumably come off the road some time ago; only the L plate seemed to be surviving the elements. 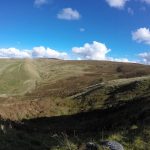 When I finally got back on I caught up with some club-types who had managed to ride up and were having a breather.  One of them commented that I was “carrying a lot of weight”, referring to the bike rather than me, although I suspect reducing the latter would be more productive; all in all he came across as a bit of a prat.  After this is was mainly downhill, past Hardcastle Crags where we had a work trip, and rejoining the route out at Slack. 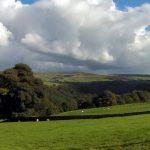 Back through Heptonstall over the cobbles, it was a rough ride with arm and leg muscles absorbing all the bumps and simultaneously having to grip the brakes.  I had been concerned about my left arm but in a wrist tubigrip it wasn’t anymore uncomfortable than my right by this point.  Mr Prat followed behind me over the cobbles and we rode back to Mytholmroyd pretty much together, at which point I thought my weighty bike can’t have been too bad.

Arriving back at the hall I checked in with organiser Chris Crossland who said he thought he’d recognised me from a previous event (Spring into the Dales) which impressed me.  As did the food on offer.  The trains back to Leeds were hourly and I left hurriedly to make the next one, although I would have quite happily sat around for a bit longer.  I was pleased to see the woman and her Dad I had spoken to earlier finishing just as I left. 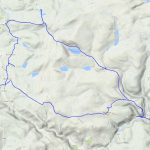 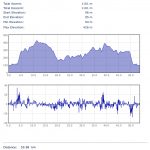