The next big ride is a 400 km and I really shouldn’t be doing that without checking that my new wheels – built by my own (unfair) hand – are not about to turn into Pringles; nor that my new electrics won’t fail or mud guards fall off.  Well none of those things happened, despite being reversed into (at low speed) by a shiny Audi in Poole.  I hope it put a dent in her bumper and scratched the paint, but as it seemed to cause no damage at all to my wheel I suspect not.

It feels really different.  When I got out of the saddle on the hills there was a lot more wobble. I was more worried going over potholes and lumps than usual, but that’s because I made the wheels and so have no reason to be confident in their strength…but if they can cope with being reversed into by a car they are probably ok.  But they did feel faster.  It was an easy ride.  I got up those hills heading home towards Eccup without a problem and found myself doing weird things with my leg muscles going up King Lane. I can’t separate improved fitness (which I probably do have) from bike fit and new components, but the sum of these is comfort and confidence in riding.  That 400 km is something to look forward to rather than dread, and the 600 km is achievable.  I hope so, because it’s now all that remains between me an a Super Randonneur. 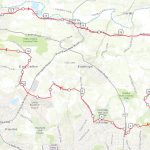