Last year I did the longer (200 km) version of this ride; looking at the route is hard to believe it’s only an additional 85-ish km.  This was far more pleasant, starting and finishing in the light.  It was certainly long enough for me to be doing having not ridden anything long for sometime.

You need to be fairly confident riding in traffic for these rides as they are mostly A roads, and I did have a number of daft overtakes and close passes.  Eavesdropping on a conversation at the cafe control one bloke was saying that the 200 km is thought to be the oldest on the calendar and probably originated as a local club reliability ride pre-Audax UK (est. 1976), but no one remembers.  Certainly the roads would have been quieter then.

It was cold and wet at the start and riders were coming and going, some seemed to be on the 200 km (which started an hour earlier) and only just starting, so at 8.55 am I decided to get on with it rather than wait around.  Perhaps I missed some information about a road closure (which turned out to be passable by bike as is often the case) but I don’t know.  The route follows canal and railway line through Littleborough and Todmorden then head up to Holme Chapel and Clivinger, which is a nice section, the steep valley sides had a dusting of snow on the top.  Then through urban Burnley and Nelson before Blacko, where I stopped to take a photo for comparison with the last one. 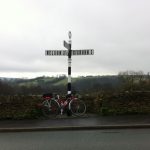 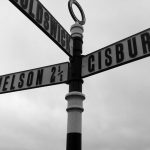 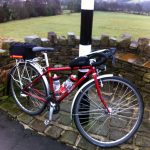 The weather was backwards on this occasion, it got better as the day went on.  Over the highest point of the ride then down to Lisburn for an info control.  This was nice steady climbing.  Then a lower flat section, where a road closed sign blocked the route but I continued on and there was still half the road left (and no work being done at the time).  Unfortunately the road surface was littered with debris and I soon heard a noise coming from my front tyre.  I stopped just 3 km short of the control to find a piece of glass and a slowly bubbling tyre.  I don’t get many punctures so I’m not very fast at changing a tube.  I managed to break a tyre lever, and the roads weren’t very clean so I was spreading mud and probably worse over my hands and tights, but at least it wasn’t raining now. 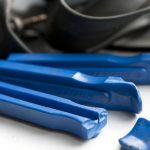 Eventually I got to the Country Cafe control in Waddington, recently visited on the Season of Mists. 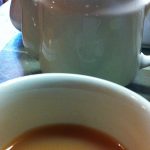 After this a nice profile of Pendle Hill is available when there is less cloud.  It did lift later. 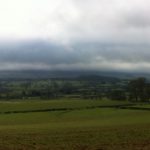 Back over the Ribble and around the edge of Blackburn.  Here the route directs riders to turn right at a roundabout for the M65, which was horrible last year so I had spent a bit of time on google street view and found that I could cut it out by going along the towpath underneath (Leeds and Liverpool canal).  The sun was putting in an occasional appearance now and there had only been a few spot of rain (and hail) so I stopped to take off my waterproof and replaced it with a windproof gilet.  Up over Oswaldtwistle Moor, where I thought I might expire last time.  So much tamer in the sunlight and it was easier than I was expecting.  Another ‘highest point’ of the ride (303, 297 and 295 m peaks). 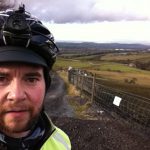 Through Haslingden and Edenfield, then the final climb up to Ashworth Moor Reservoir.  I was looking forward to this as it had been one of the few highlights of last years ride.  It’s a nice road with good views but the overtaking traffic took some the enjoyment away, especially on the fast descent when a car came past into oncoming traffic then promptly turned left, causing me to brake.

On the last section through Rochdale I was unsure of a junction (named destination on route sheet wasn’t on the sign) but fortunately another rider appeared at the red light and said his GPS was indicating right.  Maybe this is where I went wrong last year.  We got separated at other lights further along (where a driver stopped and asked me if I would send my camera footage to the police if he went through the red light – I was able to reassure him he was quite safe as the thing on my helmet is a light, but the fact that it can be mistaken for a camera is no bad thing), but he kindly waited up ahead to make sure I was still on track.  The last few junctions were a repeat of my way in from the station but when I called a left (which cuts a little corner off) he decided to go with his GPS so I arrived a couple of minutes before him.

Howard, which his name turned out to be, and I both took advantage of the veggie pie and peas option laid on for finishers at the pub. 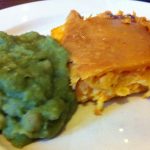 Back to the station and there was some very nice light on the hills we’d just come over, and the last of it did its best to make Rochdale look appealing. 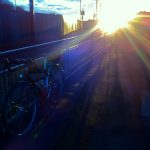 Establishment-names of the ride: Fecit Farm, and Only Foals and Horses stables. 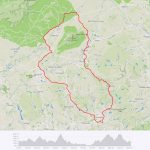 A cold day, glad of my four top layers and thermal tights. Toes never had feeling.  Routes around this way are very much dictated by river crossings; Tadcaster (no photo) and Thorp Arch, just after which I recognised a control from Goodbye Xmas Pud.  Happy to report that although it was a slow ride my hill climbing and weight are both improved since then. 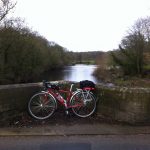 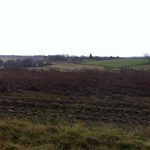 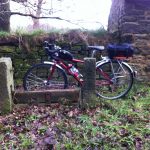 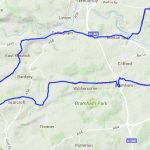 Officially allowed back on the bike, so a short but hilly ride around the local roads.  Made it up the Chevin which I was quite surprised by. 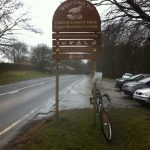 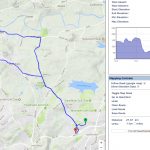 Off the bike and a fantastic weather forecast, so revisited Ingleborough although this time a linear route from Ribblehead to Horton. It was a Sunday so the trains were few and far between…happily the pub was open, and the waiting room in the station was warm and dry. 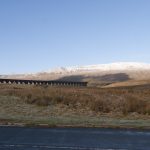 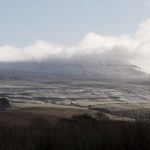 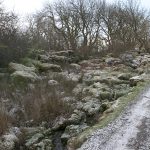 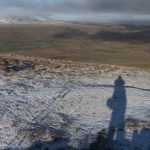 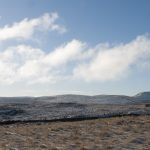 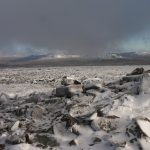 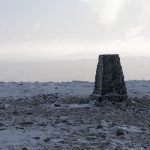 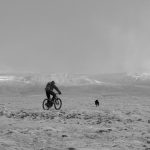 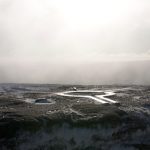 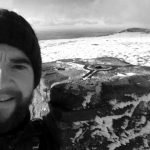 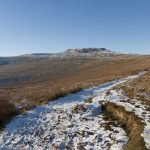 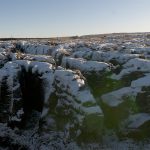 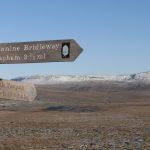 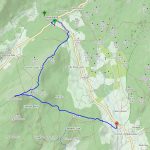