I don’t know what was wrong with me last time, as I found this – dare I say it – easy.  A pleasant enough ride if a little uninteresting.  The only section I was familiar with was Clumber Park, but in the opposite direction this time.  The day was very mild and after the first stage I didn’t wear my windproof, and even at the start I had changed into thin gloves.  The sun tried to come through the cloud with limited success.

I had brown rice the night before, then tea and a croissant on the train.  First control at 44 km was at a village hall with local ladies (very stereotypically the only males in sight were the riders and orgs) providing tea/coffee and cakes.  Nice but not cheap, I understand the proceeds go to a local church fund so it’s better than tax-avoidant Starbucks which furnished me with breakfast.  Shortly after leaving the control I passed a couple of riders sitting on the verge, next to a pick-up with trailer facing in the wrong direction and two inhabitants.  It didn’t look as if I could be of any assistance so I kept on going.  I’ve since read on yacf that there were actually four riders, knocked off when a 4 x 4 towing a trailer overtook and came back in too quickly.  The driver didn’t stop, one of those involved said they might not have even realised what had happened (it was a large trailer).  The vehicle I saw was passing and the two guys in it sounded very helpful.  The worst casualty had two cracked ribs.

On leaving Clumber Park a van slowed while passing me and the passenger warned that a wide load was coming up behind me and to watch out, always good to see considerate behaviour to balance the idiots.  It was indeed very wide and had a police motorbike escort, but I turned off before they caught me up.

The second control was a free one in Southwell, which seemed a posh place complete with a minster.  I settled for a sandwich from a small shop and a receipt, then found some public toilets.  On the final leg back to Alfreton I stopped for the only photo of the ride, an addition to my collection of strangely located trig points (SK616558).

I shared the ‘two’ bikes spaces on the train back with a couple from Sheffield who I spoke to on last years’ Colourful Clumber.  The station is very close to the start and even better the return there is downhill.

This was the first outing for my new luggage, a Carradice Super C rack bag.  I bought this partly to use with the rack when combining audax with camping, but also as an alternative for a large saddle bag as there isn’t much room under my saddle.  This also means that the rack bag needs to be quite far back which is a little inelegant but it seems very stable.  I think I prefer this to having most of the weight in the bar bag, but I must get a small cafe lock as the one I took is heavy.  I had no need of the full capacity on this ride (in fact I picked up 4 cans of Old Speckled Hen on the way home and had no difficulty fitting them in) but for longer/more remote rides it will be useful. 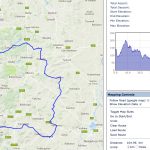