…was how the organiser described ‘riding the route by shortest distance’.  Because those extra 47 km to ride the route proper will make it a perfectly normal and pleasant experience. 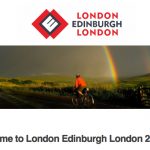 I have entered London-Edinburgh-London; rider 5817.  So far my longest ride has been a 200 km.  I volunteered on Windsor-Chester-Windsor in 2015 which was not only a great experience in itself (why don’t I have a blog post about it?) but also rewarded me with a guaranteed place on LEL.  Although since I’m an AUK member I would have had one anyway, but it felt extra-specially guaranteed.   I have a plan, I’ve entered as many audaxes in advance as possible to build up to hopefully two 600 kms in June, and an SR series too all being well.  It will be my 40th birthday this year so I decided to mark it by doing this, and putting the remaining surgeries that I am waiting for on hold, as they will keep me off the bike for some time.

As a consequence, future posts might include such exciting details as schedules, food, how much I weight, etc.  This is to aid my preparation and not because I am under the illusion that these things are in any way interesting.  If it gets really bad I’ll include details of sudocrem applications.