Last chance for a 600 km before LEL.  This is an x-rated event and in retrospect maybe I needed a bit more TLC on my first ride at this distance.

I travelled down to Exeter the day before the ride and had time to visit some old haunts, including my favourite pub, the Double Locks. 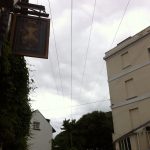 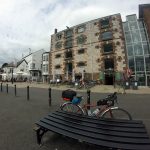 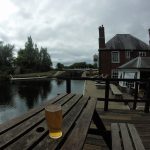 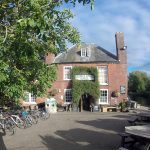 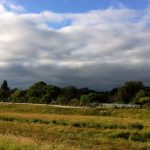 Then I made my way (using the train to Digby and Sowton which looked easier than navigating dual carriageways) to the Travelodge at Exeter services where the ride started the next morning.  I’d originally booked another bed near Reading, but when I took a detailed look at the route and my schedule I realised it would be the most expensive bed per minute, so cancelled and took a bivvy bag, mat and sheet liner instead.

There must have been around 10 riders in the car park next morning.  I spoke to one (Hugo?) briefly but didn’t see him again, he looked fast.  A few of us kept similar pace for a while but I rode alone.

I’d spotted this feature, the Burrow Mump, on the map when looking at the route, noticeable as the few contours for miles around. 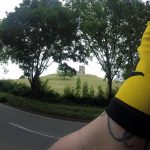 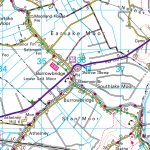 The route takes a fairly straight line through Devon, Somerset, Bath, Gloucestershire and Oxfordshire.  The first control was in Wells, where I joined a chap from Audax Bristol in Costa.  I left before him after chatting to a couple of non-audaxers cycling outside, but taking a wrong turn by the busy market (I went through the wrong arch and did a few circuits of the centre before finding the right one) he must have overtaken and I didn’t see anyone else on the road at any point. 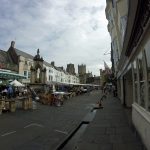 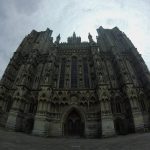 I was worried about getting lost in Bath, remembering that I’d got through it on my trip to Lands End purely on luck, but the routesheet proved fine.  I did have to walk, very carefully, down this street, it was so steep. 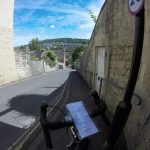 Somewhere on the way out and up I wasn’t sure I was still going the right way, but eventually the routesheet made sense again.  The sun was hot and there was quite a long climb which I’d have hated to back-track on.  Next control was just through Cirencester at a services, and a few other riders arrived while I was there.  My feet were painful, ‘hot foot’ I think, so I made the most of the time off the bike here and took my shoes off, and lay down and closed my eyes for a while on a small patch of grass.  I’d fitted a new saddle (Brooks Cambium) for the previous weekend’s rides, and while I found it comfortable it seemed to cause sores very quickly so I was doubly uncomfortable and not enjoying the ride.

After Bibury (very busy) we entered Oxfordshire and the road surface deteriorated to that all-over very rough covering that can’t be avoided.  I noticed a new rattle and stopped in Buford to find my rear mud gard had broken where it was bolted to the frame.  Some tape was sufficient to keep it together, but didn’t stop me internally grumbling that this was the second rear guard that I’d destroyed.  To be fair to SKS, both have been a result of user-abuse; the first went where my saddle bag was bouncing on it, and this break was from an extra hole that I’d had to make to take the bolt. 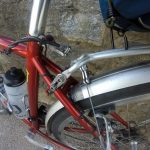 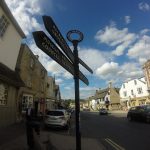 It was now becoming a nice evening, but approaching Charlbury I was struggling as well as feeling fed-up. 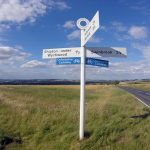 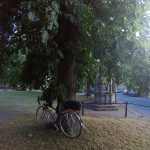 I turned off-route to the village centre and a Co-op, for coke and crisps.  After some thought I decided to quit, and head back to Burford for the night, then on to Cheltenham the next morning for a train home.  I cancelled my second night’s booking in Exeter, and was glad that I’d had to get an open return train ticket as it wouldn’t cost me any extra to get back to Leeds.  I ended up in my bivvy bag in a field behind a car park, glad that the night was warm and dry.  The A40 to Cheltenham the next morning was nice and quiet, if a bit of a slog. 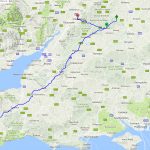