An overnight stop at my sister’s just a few miles from the start at Cheadle village hall meant I didn’t have to get up too early.  I decided to go with carbs, so had pasta the evening before and porridge before I set off.  The forecast was decent if cold, so I was surprised by the number of still-unclaimed brevet cards when I arrived about 8.15 am.  Time for coffee, then the usual understated ‘right, off you go’ start.

First we passed Gatley station, which I made a mental note of in case I needed to get a train back afterwards.  There are quite a few train stations on or near the route so plenty of bail-out options. After going through a bit of Wythenshawe (nothing I recognised) and around Manchester airport we were soon in the Cheshire lanes, passing a number of large houses.  Footballer-land indeed.  A few flakes of snow but nothing to be concerned by.

Around Tatton Park, and I think I recognised a bit from my John o’ Groats trip.  The first control was at Delamere Station Cafe, nice and doing a good job of accommodating as it’s not a big place.  I went for beans on toast, they warned that there would be a half hour wait for food which I decided to risk, it was more like 10 mins in the end.  It started to rain/sleet while we were here so I put my waterproof on as I left.  Of course it didn’t last long so I stopped to swap back to my windproof after a while.

Initially we’d been told there was a detour just after the control, and I had altered my route sheet to account for it.  Then at the start we were told the original instructions were fine, but since I had obliterated them I had to stick to the detour.  Unfortunately I didn’t go quite far enough for the turning, but thought I’d missed it and retraced, then spent a little while guessing before coming back on route.  Thereafter I was mentally adding about 1.4 km to all the route sheet distances.

There was an info control on this section which asked for the phone number of what could have been a business or a cafe.  There was no sign of the place named on the brevet card, so I took a photo of a cafe that was full of (other) cyclists and its phone number.

The control in Audlem was a cafe or receipt from the Co-op, there was space in the cafe so I opted for that.  There was a group of 4 at the next table, and one of them, Chris, said he might need to tag along with me as the others were too fast…I thought he was joking but as we were all leaving about the same time he asked again, saying he had the route sheet in his pocket but no holder, and no sat nav, so could he follow me. I was a bit apprehensive as I usually ride alone and find having other people close by a bit of a distraction, not to mention having to make conversation.  However it turned out that we were going about the same speed, and chatted on and off quite happily.  The route was fairly flat here and I felt quite comfortable.  At one point I could feel myself starting to struggle, but managed to eat a flapjack on the move and was fine afterwards.

It started to get gloomy, and I had to strain to read the route sheet.  I had forgotten to bring my head torch, bollocks.  Chris and I stopped at the third info control at Henbury for a break, and a few others joined us.  I wolfed down my jelly beans without noticing the flavours.  The question had us all stumped; ‘what sort of flowers does Flora sell?’  Well it seemed to be a garden centre, so presumably all sorts of flowers, and a coffee shop, alas closed.  We wrote down a selection of information (e.g. ‘no idea but she’s been selling then since 1954’).  Apparently the answer was silk.  Neither this nor the previous mystery info seemed to be a problem for the organisers, I guessed they hadn’t checked them recently.

Now I couldn’t see my route sheet at all, but Chris knew where we were and so it was his turn to lead the way.  Another missed turning had us nearly heading to Prestbury, but thankfully one of the others on the road near us noticed.  Once we got back into built-up areas I was able to see the route sheet again by the street lights, but I had no idea if we were still on the intended route, fortunately Chris was confident and we started seeing signs to Cheadle.

Tomato soup and rolls at the finish was just what I needed. I wasn’t too bad but decided I didn’t want to ride all the way back into Manchester centre so thought I could take a train.  By this point my sister was in a pub in Didsbury, so I rode there (only a few kms) and rehydrated before getting a train into Piccadilly, and then home.  Unlike last time I had enough energy to ride the mostly uphill journey without issue. 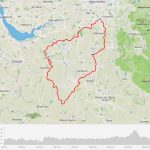