I’ve been a member of Outdoor Lads for about 5 years, and I used to do some hill-walking with them, but once I got a bit more serious about cycling it kind of dropped off.  They do more cycling events now and I saw this one which was local and a nice route, so I went along.  For me it was sensible to ride to the start at Ilkley, although I took the minor roads and lumpy route which was slower than calculated (not helped by forgetting to take any water and having to go back home after about 2 minutes).

We started from the station in Ilkley, with a mixture of folk arriving by train or driving.  There were six of us which was a really good number, small enough to stand a chance of name-remembering (although I was the only newbie and several of the others already knew each other).  The first section was familiar, past the golf course and then Bolton Abbey.  It had been raining, albeit lightly, from the minute I left the house, but it was warm and I was in shorts and short-sleeved jersey all day. Waterproof socks and a cap kept me happy.

The planned route was longer but given a slightly delayed start and the weather we cut it short, and Pateley Bridge was our lunch stop and turning point.  I had sworn never to ride through here again after the Way of the Roses, but I couldn’t ride around the Dales for too much longer without a visit.  It was fine, although a little scary on the descent when I saw Dean in front me having a rear wheel skid on a bend.  The section after this was new to me but soon joined up with previously ridden roads…nice to be there in the daylight in some cases.

Downhill to Ilkley and we found an ‘informal’ pub for a pre-departure pint.  As the ride had been shorter than originally planned I was keen to ride home (which made it over 100 km), so in retrospect I should have avoided beer.  As it was I had to stop about a third of the way up Otley Chevin for a wee, a mouthful of water, and my emergency rations (a Boost bar).  After that I was fine. 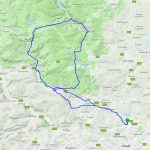 110 km, av 19.8 km/h (this is interesting because although I could keep up I felt it was faster than I would have gone by myself)