I last did this three years ago shortly after moving to Leeds, then 2016 was a year of surgery and no rides, and last year I ended up on the shorter Leap into the Aire after a travel-to-the-start cock-up.  The train from Leeds arrives in Mytholmroyd 6 minutes after the start, so I was always going to be ‘behind’.  I was happy that the ride up out of Hebden Bridge and down to Oxenhope was easier than on the first occasion.  Mist was lifting out of the Worth Valley ahead and the views were great. 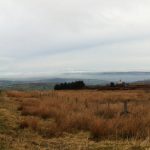 The rest of the hills, of which the ride is entirely consisted, were hard going.  I got to the checkpoint at Earby around the same time as a few others, but got going again as quickly as I could, pausing only to down a banana.  The first control proper was at Gargrave and again I went into the Dalesman Cafe and wondered why there were so few of us in there, although this time my beans on toast were quite slow coming and rather low on the beans, so I’m not sure I’ll visit again.  By the time I left the controllers were also leaving and there was no sign of anyone else on the ride, so I started to worry that I’d be brining up the rear for the rest of the day.  Once off again I took a right turn prematurely but happily realised very soon and only added an extra km.  Some nice lanes around here. 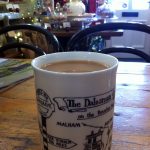 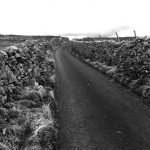 I saw a few other riders but wasn’t sure if they were actually doing this ride or just happened to be going the same way.  I lost a couple of them near Bolton Abbey where we crossed the Wharfe so maybe the latter. 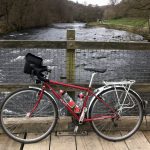 Blimey that bar bag is fugly.  Arriving at the control in Keighley I was happy to find quite a few others and felt like I was on a calendar event after all.  Rossi’s cafe is great.  The person serving took a bit of convincing that yes I did want a large coffee; it was a small bathtub but I had found the ride hard going and it was just what I needed.  With that and a chocolate-topped flapjack I was ready for the final 20 km back over Cock Hill.  I actually enjoyed this climb both ways, it’s long but doable, in contrast with some of the steeper hills on this ride which in the latter stages had me asking “what the actual fuck?” when I saw the walls of tarmac coming nearer.  I did make it up them all though.  It’s not quite the hilliest ride I’ve done (the Season of Mists is a 2.5 AAA and got me a gold badge), but it is fairly early in the year, and they are just unrelenting.  Thus my top-of-cock selfie is no reflection on Calerdale, which I was quite happy to be welcomed to. 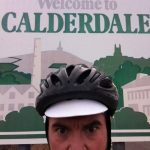 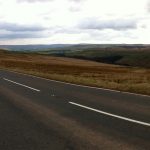 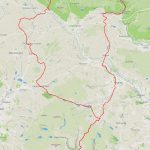