I had originally registered for the Old 240 400 km, but after reading Chris Crossland’s ride notes (“the route will take you to remote and inhospitable places (e.g.Yorkshire)”) decided that it was a little ambitious for my first go at this distance, so switched to this flatter and less remote route.  I’d love to ride the Old 240 though, maybe next year.

Accommodation was provided in the Mytholmroyd Community Centre the night before although it didn’t seem that there were an awful lot of us taking advantage of it. 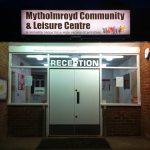 Many more arrived the morning and I met Raj and Osian from the Wiggy 300 km, plus Bob Bialek who always make a point of making sure he’s remembered both of my names whenever I see him, which is very nice.  He was doing the Old 240 of course.

A loose group of us rode together for a while, through the main roads and dual carriageways of West Yorkshire, eerily quiet at this time on a Saturday morning.  The first control was at Busy Lizzies Cafe in Castleford, a great place for it with just the right sort of food at just the right speed.  Shame about the bog though.  Two male cyclists seemed to be using it simultaneously before me; maybe safety in numbers.

Shortly afterwards, and probably due to the debris on this bridge, I had a rare puncture.  I noticed it not be feel but the noise of escaping air.  Probably because I don’t get them that often I’m not the fastest at fitting a new tube; Osian came past but I told him not to wait. 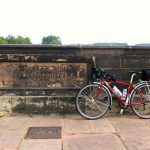 We crossed the Ouse at Boothferry, from where the M62 crossing looks rather impressive. 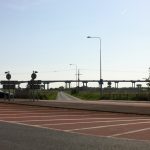 A little lump over the south end of the Yorkshire Wolds then it was flat again all the way out to the Spurn Head; it’s Not Quite because some severe storms have destroyed part of the spit.  Nice to have ridden to the coast though, and a good cafe as the control. 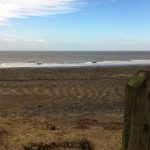 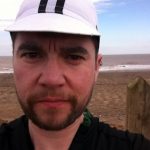 I really enjoyed the first bit of the return journey, riding past gas terminals on the lonely cost roads was rather eerie.  Soon though the wind made itself known, and it became a hard slog.  The next control was a petrol station and I caught up with a trio who would remain not far ahead of me for the rest of the ride.  Banter seemed strong here and I think kept them going.  Next I got lost in Beverly and spent ages going round in circles unable to find “L by Minster sp. Howden B1230”.  I don’t know how much time I lost, I even went to the train station to look at their map of the local roads to try and figure out where I should be going…maybe I was tired and would have managed under normal circumstances, although it must only have been around 8 pm.  Eventually I found a sign to North Cave which was the next place listed on the routesheet, and once on the road I realised it was the one I was supposed to be on.

After North Cave the route rejoined the one we took east, until near Goole where it diverged again and a 24 hour McDonalds provided a welcome control and feed.  It was hard going and I was really looking forward to this by now, not my usual diet but it was just the job.  The three other guys from the last control were here, one of them chatting to a member of staff who he recognised from doing the ride the year before; she was full of stories about wet damp cyclists (it sounded like another audax uses this place as a control too) and late night visitors on their way to the hotel over the road after nights out.  She seemed to really enjoy her job, seeing all sorts coming though the door, both regulars and randoneurs. 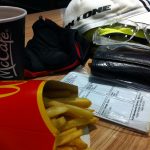 The return leg was now south of the trip out, with an info control in Crowle.  It was properly night now, and I was riding on my own all the way.  It was a struggle, I felt like I was going really slowly although I’m not sure if I was.  Overall average speed was just over 20 kph so not the fastest of my rides.  I was easily spooked, I kept seeing shadows or lights up ahead, or noises from behind, that I thought were people – although quite who’d be sitting on a park bench in a village or lurking behind a tree at 3 am I don’t know.  I thought about stopping to have a nap but I didn’t think I’d be warm enough having nothing to lie on.  I did stop in a bus shelter but just had a bit to eat and a rest.  And got spooked because I thought someone was watching from the house opposite.  Eventually the sky began to lighten and the birds awoke.  This was my first experience of origin right through the night and I can’t say I enjoyed it, I just kept going as there didn’t seem to be any other option.  I also hadn’t appreciated before the decrease in speed because of not being able to go downhill as fast as in daylight, my light not illuminating enough of the road up ahead to be able to descend confidently.

Eventually the welcome sight of Woolley Edge Services, where I found the three amigos again.  I had something to eat from Costa and a sleep on their furniture.  I had managed to nod off leaving my wallet and phone on the table to anyone passing to help themselves too, but happily the two blokes who came over to ask about my bike and what I was up to were entirely trust worthy and just told me off for not being careful.  I think I misread my watch and thought I had less time than I did, in reality I had plenty of time for the last 30 km at this stage although I was feeling pretty knackered.  One of the others guys commented at the end that there had been a lot of ‘experienced audaxers’ having a good break here when with only 30 km left they’d normally be cracking on, and that the wind had really challenged all of us.

The final section had a sing in the tail for me in the form of Halifax, where I got lost having missed a turning.  More time wasted going up and down, back and forth…I don’t fully trust the map on my phone as th compass is dodgy so it takes a while for me to get my orientation even if I know where I am.  Eventually I worked out a way out and down some A road or another, getting onto the A646 back to Mytholmroyd. I pulled into HQ in a somewhat grumpy mood, with about 10 minutes to spare, another Lanterne Rouge for the collection.  One of the trio came over and we had mutual congratulations in a dazed way, he looked as bad as I felt (I didn’t venture near a mirror myself).  Also Osian was there and hadn’t finished much before me, he’d been feeling ill and I heard later he’d had several days off work with the large so he did really well to finish.  Raj was back too and about to head to Hebden Bridge with another rider to wait for the first train home.  I had hoped to be able to sleep a bit at the end before going home (first train back to Leeds was about 10.30 am it being a Sunday) but as the control closing time had come folk were packing up and heading off.  I ended up gingerly riding to Hebden too, for lots of coffee that didn’t seem to have much effect.  I don’t remember feeling particularly pleased to have completed a 400 km, just exhausted and still a bit annoyed with my two lost episodes. 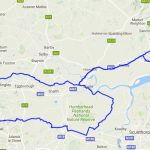