In which I DNF.

Unusually I got up early enough to have some porridge before I left the house.  The early Saturday morning trains contained the dregs of Friday night, although mine was quiet.  It wasn’t far from Rochdale station to the start (a pub), which was very busy and I just had time to pick up my brevet card and use the lav.  I waited until most of the pack had gone before leaving as they’d only pass me (often too closely for my liking).

This route is almost all on A roads which is unlike most audaxes I have done, but going around Pendle Hill and then the Forest of Bowland they are not the busy sort.  It also meant several long stretches with no turns, and as I often find concentrating on the route keeps me occupied (and stops me noticing if the kms are dragging past too slowly) I wondered how I’d find this.  We left Rochdale and initially headed the way I had come on the train, to Todmorden.  I don’t know this area very well so it was interesting to ride through and see the steep sided valleys.  We passed JJ’s Diner which was a control on Mellow Fruitfulness, then through Burnley and Nelson up to the Highest point of the ride.  There was a bit of sun at this point although visibility wasn’t that good, Pendle Hill could just about seen through the haze.

I hadn’t been feeling too good from the start, but this is often the case and I usually settle in to it.  The first leg was 70 km, the longest I’ve ridden in one go, and I’d planned to eat a couple of times while moving.  I stopped briefly once to take a layer off as it was a mild day, and again to take a photo.

Then down to Gisburn and on to Settle, where the Old Naked Man served as a control, a place I’d already enjoyed on the Way of the Roses.  Although it had been a struggle I was on my schedule, arriving around 11.20 am.  I had a fried egg roll and a large coffee, but as I was feeling like I needed more a went for a tiffin-type thing too.  I think this may have been a mistake; I soon started to feel nauseous once I got going again and had visions of heading back to Settle and a train home.

The next section along the A65 to Devil’s Bridge in Kirby Lonsdale was probably one of the shortest I have ridden, at 26 km.  I could see more places I’d been through on the WotR and was glad to be on this flatter route here.  Devil’s Bridge was busy with bikers and cyclists, and after having had my card stamped by the controllers (operating out of a small van) I got a mug to tea from the mobile cafe, it being all I could stomach, and spent a few minutes watching the River Lune passing under the bridges.  Surprisingly the tea perked me up and I set off still on my rough schedule.  I exchanged a few words with some other riders here; a VC167 rider who rode slightly more slowly than me but stopped for less time so we were constantly passing each other, and a couple going slightly faster who I saw quite a few times (actually I don’t think they were a ‘couple’ because one didn’t know if the other took sugar in his tea).

Next was a fairly flat section, following the Lune to Lancaster.  Through the city I followed signs more than the route sheet but seemed to come out the right way.  I was feeling better during this section and tried to eat a little bit on the go.  Then down the A6, past Lancaster University and parallel to the M6.

The final control at 136 km was The Barn, a cafe and shop, in Scorton.  Some bits of it looked new, including a shelter bike storage area (including locks) which was rather good.  I felt hungry so had a brie baguette and a large coffee, which came to a slightly steep £9-something.

The final stage was another 70 km and I planned to stop a couple of times, approximately each 25 km, to make it manageable.  I had realised earlier that my fettling after the last ride had solved the difficulty I had been having of moving up from the middle to the top chain ring, but at the expense of the smallest ring which was now unaccessible.  I tried changing the cable tension but it wasn’t enough, and so I did more honking up hills than I usually do.  I’ve been on plenty of rides where this wouldn’t have been possible, so although this wasn’t flat I’m glad it didn’t have any stupidly steep hills.

After climbing up to Longridge on a section of unclassified roads there was a nice descent into Ribchester, a crossing of the Ribble and then the inevitable climb up the other side.  I’d been along here in the opposite direction on the way to John o’Groats.  I was feeling ok at this point, passed my VC167 rider again, and then stopped briefly on the edge of Blackburn for a bite to eat.   We went through places called Salisbury and Wilpshire, and I started to wonder if they’d run out of place names in these parts. Soon I caught up with another three who’d been in the last control at the same time, and had stopped briefly at the side of the road here.  They went on ahead and took a right turn earlier than the route sheet suggested; a wise move as I then had to negotiate a multi-lane roundabout by junction 6 of the M65.

The next section was horrendous, crossing Oswaldtwistle Moor.  It was fully dark by now and had started to rain a little.  I was really struggling, all I could see ahead was the road going up with no shelter or even a place to stop.  I knew I had to keep going as stopping just at the side of the road wouldn’t be safe.  Eventually a track or small road appeared on the left and I pulled in.  Although going up hill I was getting cold because I was going so slowly, but first I had to take all my top clothes off to take a leak (cursing bib shorts).  Then I swapped the wind shirt for my waterproof, and made myself eat more even though I didn’t feel like it, especially anything sweet which was all I had.  Mr VC167 passed me at this point, he seemed to just be able to keep on going for ever.

Feeling slightly better and conscious that this was no place to get cold I started off again, and although I couldn’t see it I had done most of the climbing over the moor.  I’d thought that what I needed was a coke from a petrol station or shop but the sugar seemed to have kicked in so when I passed several places in Haslingden I stupidly didn’t stop.  It wasn’t long before I was feeling rough again, now my brain wasn’t working and I didn’t feel safe riding so I stopped and walked for a bit.  A couple of other riders passed me (including Pompino guy who I think was on one of the last two rides I did), they asked if I was ok and I said I just needed a breather.  I managed to start riding again just before Edenfield, where I hoped to find a pub I could stop in for a coke and to find the nearest train station.  This was at 192 km which sounds so near the finish, but it seemed so far at the time.

Edenfield, however, had other plans and everything seemed closed, so I somehow kept going, up the final climb over the moors to Rochdale.  I passed Ashworth Moor Reservoir, shining with the reflected lights of the surrounding towns, and as bad as I felt the lights spread out in the valley below looked rather beautiful from up here.  This also marked the 200 km point, and I knew that at least I’d get back to Rochdale.  Finishing seemed possible.  Once in the city I missed a turning (not sure if that was routesheet or my error) and had to stop to look at the map on my phone.  I worked out where I was and headed to the train station, having ridden from there to the start earlier I knew the way.  I still didn’t know if I’d finish.  The arrivée closed at 9.30 pm.  It was about 8.45 pm when I got to the station, and that was enough for me.  A train was due just then and happily was running a bit late, so I made it and called in as a DNF once it got underway.  The person I spoke to said there was still one person unaccounted for.

I could have finished, but I’m not regretting choosing not to.  I was still feeling sick at this point, it would have to have been a quick trip there and back so as not to miss the next (possibly last) train back to Leeds, but mostly I just had nothing left.  I’d actually left Rochdale station at 7.30 am that morning, so technically had done a 200 km within time, albeit not a validate-able one.

The train was quite full with a lively crowd.  What looked like a class full of A level students got on later, one of them voicing concerns that traces of powder were visible around her nose, as she’d snorted an Ecstasy tablet because she didn’t like the taste.  Happily they’d all got off by Mytholmroyd and I was able to put the bike in a more sensible place and get a seat.  On arrival in Leeds I got a bottle of Lucozade and had half of it before walking though the city centre, partly because that was all I felt like and also to avoid more merrymakers.  I cycled a bit where it was flat or downhill but walked most of the way, getting back after 11 pm, too tired even for a shower.

I’m not sure it was just an off-day, or perhaps I was still suffering a little bit from the hideous cold/flu that had kept me off work for the best part of a week a couple of weeks previously, or maybe I made bad food choices.  I still did 200 km and tried out a couple of new Appkit purchases which will be needed for longer rides.  I had a Gamma head torch attached to my helmet with some elastic chord, which did a great job for reading the route sheet just using its little white LED; the bigger one would be useful if road signs etc needed to be seen but as most of the junctions on this ride were in lit places it wasn’t needed.  The Fuelpod was great for accessing food while moving in thick gloves and didn’t interfere when riding.  My knees touched it when honking but it didn’t bother me, I’m glad I got the medium rather than the large though.

Nature notes: lots of snowdrops and the first daffodils.  The highlight was a flock of Lapwing performing aerobatics over a field at dusk. 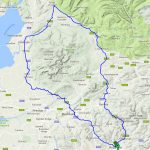 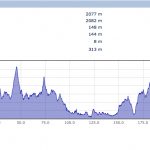